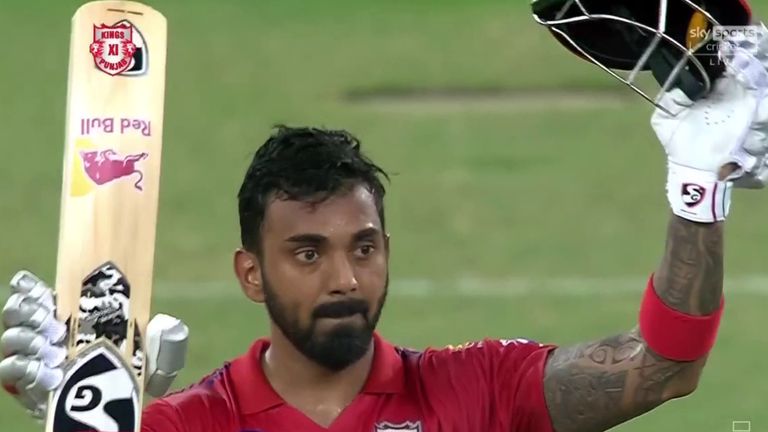 Rahul's 132no - the second ton of his IPL career and the first by any player in this tournament - was the backbone of Kings XI's imposing 206-3 and passed the 128no scored by compatriot Rishabh Pant, for Delhi Daredevils in 2018.

But he was indebted to Bangalore skipper Virat Kohli, who spurned catches when the opener was on 83 and 89, allowing him to swell his tally of boundaries to seven sixes and 14 fours.

Kohli then failed with the bat as his side slipped to 4-3 in reply before folding to 109 all out off 17 overs as spinners Ravi Bishnoi (3-32) and Murugan Ashwin (3-21) bagged three wickets apiece.

All of the players took to the field wearing black armbands in memory of Dean Jones, who passed away earlier in the day at the age of 59 after suffering a heart-attack.

Kings XI were quickly out of the blocks after being put in as Mayank Agarwal, who scored 89 off 60 balls in his first outing of the tournament, put on 57 for the first wicket with Rahul.

It took a brilliant googly from spinner Yuzvendra Chahal (1-25) to break the stand - Agarwal (26) bowled as he was beaten all ends up - but thereafter Bangalore's seamers were too wayward.

Nicholas Pooran (17 off 18) played second fiddle to Rahul in a second-wicket stand of 57, picking out AB de Villiers at mid-off as he looked to go on the offensive against Shivam Dube (2-33).

The seamer picked up a second scalp when an advancing Glenn Maxwell (five) picked out compatriot Aaron Finch at extra cover to leave the total on 128-3.

A total of 170 looked odds-on until Kohli gifted Rahul two lives, dropping his opposing skipper at midwicket off the bowling of Dale Steyn and again on 89 off Navdeep Saini as he ran in from mid-off.

Rahul made Bangalore pay with a savage assault that help to amass 74 runs off the last four overs, bringing up his century off 62 balls with a four to third man off Steyn.

The captain finished the innings in style, bringing up the team's 200 with a six over long on, then clubbing the next ball straight down the ground as the Dube's over cost 23.

A terrible start became disastrous when Kohli miscued an attempted pull off Cottrell to present Ravi Bishnoi a second gift at mid-on - the score 4-3.

De Villiers kickstarted the innings with a large six off Cottrell and remained Bangalore's best hope of a fightback after Finch (20) had his off-stump trimmed by Bishnoi.

But there was to be no miracle knock from the South African as he pinged Ashwin's googly to deep cover to fall for 28 off 18 balls - the chase slipping to 57-5.

With the run-rate approaching 18, Dube (12) was clean bowled by Maxwell's quicker ball and Umesh Yadav similarly had his castle dismantled by Bishnoi as he heaved across the line. สูตรแทงบอลแม่นๆ

Washington Sundar (30 off 27) provided some lusty blows before holing out to become Bishnoi's third scalp and Ashwin mopped up the tail to earn Kings XI their second-biggest win in terms of runs in their history.