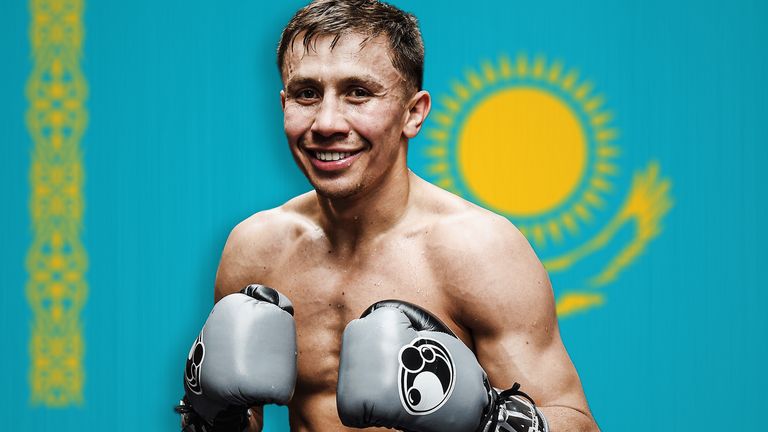 There is another middleweight fireball from Kazakhstan – "a warrior and a gentleman" – who distances himself from comparisons to Gennadiy Golovkin.

"He is not the new GGG," comes the reply but it is obvious what Kanat Islam has in common with Golovkin.

Undefeated, from the same country and in the same weight division, based in the USA with a spate of heavy-handed victories inside the distance, a first look at Islam suggests he is comparable to an early-2010s Golovkin.

"He is very smart and will do what it takes to win. He is a warrior, a gentleman and determined to become world champion. Anyone in boxing can make their legacy, if they have the right team and the right state of mind."

But Islam is already 35 and injury-prone - those world title ambitions and hopes to emulate Golovkin as a national hero are fast disappearing.

Islam is a boxer torn between two nations.

He is from Altay in China, an autonomous area for Kazakh people.

"He was born in China but of Kazakh decent and is very popular in both countries," said his manager Lopez Jr.

Golovkin, similarly, was born in Kazakhstan to a South Korean mother and a Russian father.

Islam's dual loyalty to China and Kazakhstan has caused issues with his boxing. He represented China as an amateur and at the 2004 Olympics, where Golovkin won silver for Kazakhstan in a different division. Four years later Islam won a bronze medal for China at their home Olympics, in Beijing in 2008.

From 2009 he became based in Almaty, Kazakhstan, which ominously led to his omission from the 2012 Olympics. According to RFE/RL's Kazakh Service, he was denied the permission required from China to switch nationalities and represent Kazakhstan at the London Games.

By this time Golovkin was a world champion but an avoided threat by the better-known US-based names. He won his only fight to date in Kazakhstan to middling fanfare.

Islam, nudged towards pro boxing, set up camp first in Florida then California (where Golovkin has been for years).

In seven years he built an impressive 27-0 record with 21 KOs - four of his past six fights have been in Kazakhstan.

"Islam is a very famous person in Kazakhstan and in China," says his manager Lopez Jr.

"Kanat is not the new GGG!

"Kanat is Kanat and they are different people, different personalities, different styles and different situations in life and in boxing. Kanat will make his way to be world champion by his own route."

But where Golovkin's route gathered pace and ferocity, Islam's has slowed. He has had just three fights in the past three years owing to injury.

That barren spell might finally, thankfully, be lifting for Islam. After a career spent at super-welterweight he has moved up to middleweight (where Golovkin ruled) and owns the WBO international belt.

That means he is ranked at No 3 by the WBO, behind the champion Demetrius Andrade, unbeaten Mexican talent Jaime Munguia, and Britain's mandatory challenger Liam Williams.

What does the man himself make of comparisons to Kazakhstan's greatest boxing export Golovkin?

"I admire him as a brother, as a friend and as a champion," Islam once said.

"GGG is the hero of the Kazakh people who raise the blue flag.

"People's mentality in the US, Mexico and the UK is different from Kazakhstani people. Being brothers is in first place, rather than ranking for our country.

"I think it is better for each of us to become a champion in our own weight category rather than to fight with each other. ราคาบอลไหล

Janibek Alimkhanuly is ranked directly behind Islam at No 4 with the WBO.

The southpaw is unbeaten in eight fights and promoted by Top Rank in the USA. On his debut four years ago in Kazakhstan, he wiped out Milton Nunez in one round - Golovkin achieved an identical result six years earlier.

Alimkhanuly has serious amateur credentials - he is a nine-time Kazakh national champion, a two-time Asian Games champion and a 2013 world championships winner. He beat Anthony Fowler and Jason Quigley as amateurs. He lost in the quarter-finals of the 2016 Olympics.