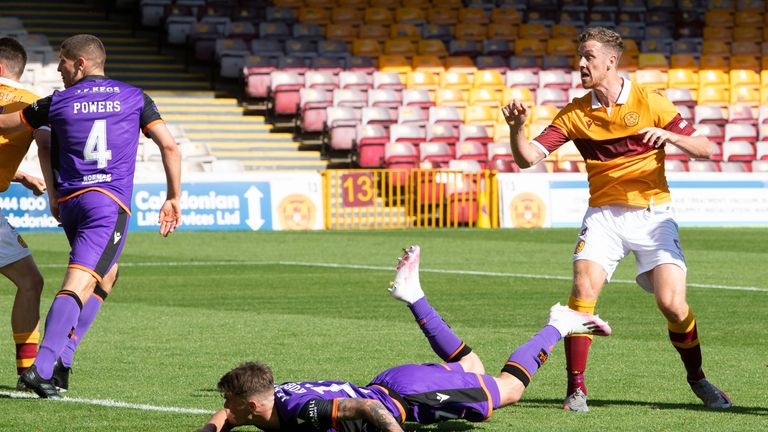 The United skipper netted his first goal for his club to seal a 1-0 Scottish Premiership victory at Fir Park.

The boyhood Motherwell fan, who also previously netted for Aberdeen in his home town, converted a Luke Bolton cross in the 52nd minute and played his part in a solid defensive display from the visitors.

United were missing main goal threat Lawrence Shankland but they collected their fourth point of the season and left below-par Motherwell with zero.

As well as missing Shankland because of a minor leg strain, Mellon dropped Nicky Clark to the bench and brought in Louis Appere up front with Bolton and Logan Chalmers flanking him in a youthful front line. Lewis Neilson also dropped out as United started with a flat back four.

Motherwell had the bulk of the first-half possession but found chances hard to come by. Seedorf set up two opportunities but Campbell headed wide from 12 yards and Christopher Long took a touch and was robbed.

Benjamin Siegrist's only first-half test came when he made a good save from David Turnbull's ambitious free-kick.

United's best first-half openings came on the counter-attack. Ian Harkes saw a shot deflected wide from one break and then set up Bolton for a good chance but the winger hit the side netting.

The game livened up immediately after the interval. Calum Butcher came close with a glancing header for United and Motherwell substitute Tony Watt - on for the ineffective Jake Hastie - forced a save with a volley from Lamie's cross.

United made the decisive breakthrough after a half-cleared corner. Bolton curled in a low delivery and Reynolds fired high into the net at the back post. แทงบาคาร่า

Long missed a good chance to level 10 minutes later when he headed over from six yards but United generally kept their hosts at arm's length and substitute Dillon Powers almost doubled their lead when his strike shook the bar.

Jordan White thought he had levelled with four minutes left when he headed home fellow sub Jermaine Hylton's cross but referee Steven McLean penalised the striker for a push.