Hamilton ahead of Bottas at Silverstone; Ricciardo a surprise third for Renault; Late Ferrari engine failure for Vettel 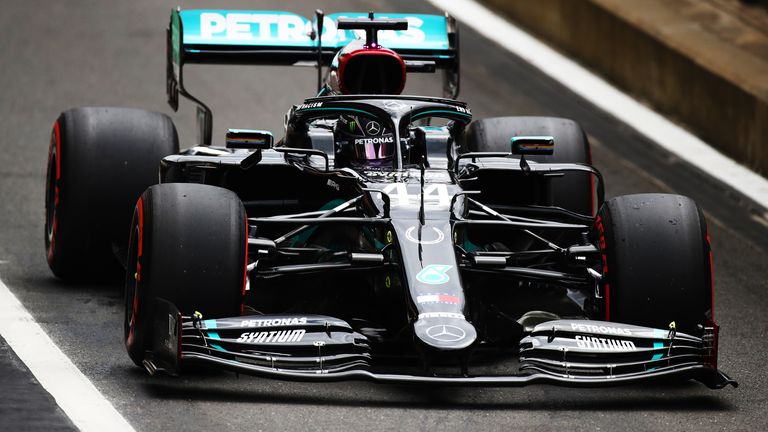 Lewis Hamilton moved back ahead of Valtteri Bottas in the battle of the Mercedes' in the second practice session for F1's 70th Anniversary GP this weekend.

But struggling Sebastian Vettel's fortnight at Silverstone showed no signs of getting better with what appeared a fundamental engine failure striking his Ferrari in the closing minutes of the session.

"Big failure at the back of the car," reported Vettel after he pulled off the circuit with oil leaking from underside his Ferrari at Copse.

Sky F1's Jenson Button said: "That's a big blow-up. It looks like it's damaged the floor. A lot of oil on the underside of the car."

Vettel had only been 14th on the timesheet at that point, five days after in finishing a lowly 10th place at Silverstone in the British GP, as his struggle with the SF1000 continues.

Hamilton, meanwhile, topped the session from Bottas by a tenth of a second via a fastest lap of 1:25.606.

The Briton's best lap also came on the medium tyre, whereas Bottas' was on a soft compound which is usually faster. However, amid sweltering temperatures at one of F1's fastest and most-demanding tracks, leading teams seem set to shun running the soft as much as possible over the rest of the weekend due to graining over the lap.

"In general it has been a good day for us," Hamilton said. "We've made some adjustments so we can get those few hundredths of a second out."

Pirelli stuck with their decision to bring a softer range of tyres to Silverstone's second weekend despite the late-race punctures suffered by the Mercedes cars and McLaren's Carlos Sainz in the closing stages last weekend.

"I think it's not a great choice by Pirelli," suggested Red Bull's Alex Albon, who was 11th fastest. "The tyre isn't quick, it's too soft for this circuit. We'll what everyone else says but I think it was quicker on the mediums than the softs."

Max Verstappen is again likely to be Hamilton and Bottas' nearest challenger come qualifying and the race, but it was the Red Bull driver's former team-mate who was unexpectedly the fastest non-Mercedes on Friday.

Renault's Daniel Ricciardo outpaced Verstappen by 0.016s on the same tyres, with both cars finishing 0.8s adrift of the leading pace.

The Enstone team secured their best finish of the season so far - fourth and sixth - last Sunday.

"The gap is still big to Mercedes but you can't magically change things within a few days," admitted Verstappen. "I think it will be quite close in qualifying with the group behind, but in the race I think it's going to be quite lonely again."

Charles Leclerc was once again the lead Ferrari, although further back than P1 in seventh, with McLaren duo Lando Norris and Carlos Sainz a little further off the pace of their usual rivals in eighth and ninth respectively.

"Our pace is ok. Compared to some of the other teams like Renault they seemed a lot quicker, so it's probably going to be a bit more of a dfifficult qualifying and a difficult race," admitted Norris. สอนดูราคาบอล

« สอนดูราคาบอล Which NBA restart games are live on Sky… »
Profile