After stepping into the role of player-manager at the age of 33 in 1986, Graeme Souness guided Rangers to four Scottish titles in five years, ending an eight-year barren run and laying the foundations for the most successful period in the club's history. 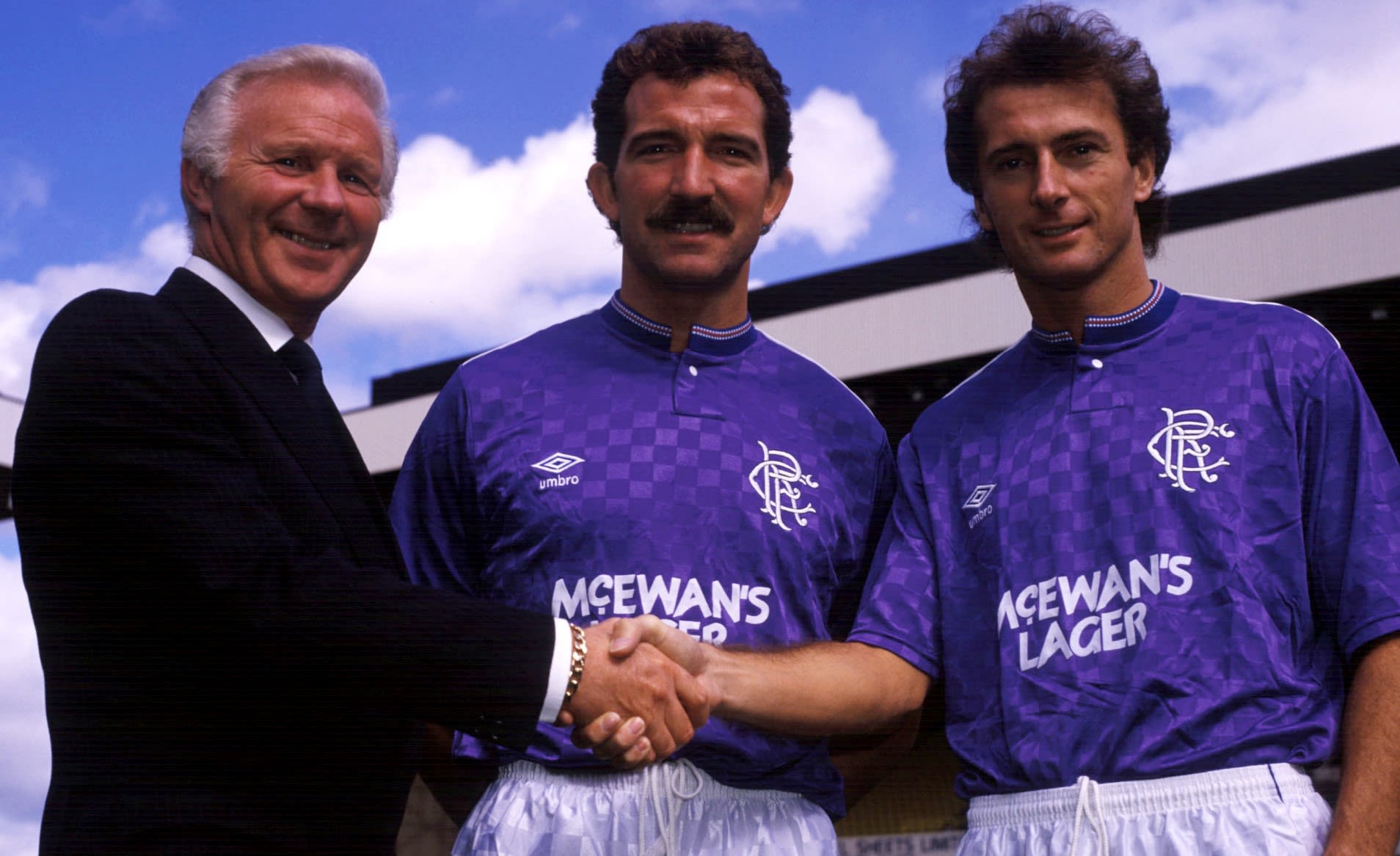 Here, the Sky Sports pundit provides a unique insight into his glittering Ibrox tenure, explaining the challenges of taking one of the toughest jobs in football at such a young age, how he reversed the club's fortunes, and why he regrets jumping straight into the Liverpool hotseat afterwards

I'd had no real thoughts about management when I got the call from Rangers.

I was very happy in Italy. I'd signed a three-year deal with Sampdoria when I joined them from Liverpool in 1984, and I was planning to honour the final year of my contract.

We had a good team there with some fabulous young players, like Gianluca Vialli and Roberto Mancini. I was living just south of Genoa in a place called Nervi, on the Italian Riviera. I enjoyed the lifestyle and it was a wonderful place to bring up children.

I'd had a meeting with the president of Sampdoria at the end of my second season in which I told him I was happy to stay. But six weeks later, I was told that Rangers wanted to offer me the job of player-manager and it all changed.

Playing was still my focus at that point. I hadn't thought about what came next. But I met with David Holmes, the Rangers chairman at the time, and he explained his plans for me and for the club. After a few sleepless nights thinking about it, my mind was made up.

I went back to the president at Sampdoria and said, ‘Look, I’ve got this chance to become player-manager of the club I supported as a boy and it’s something I want to do.’

He said he wished I’d told him six weeks earlier, but he was great about it. He paid me every penny I was due and there was no animosity.

I was on my way to Glasgow.

I was born and raised in Edinburgh, but as a kid, if I wasn’t playing on a Saturday, I would be going to Glasgow to watch Rangers.

I must have gone to around 10 European nights at Ibrox during that time. I thought I realised how big a football club Glasgow Rangers was. But I soon had my eyes opened.

It was only once I had experienced it from the inside, though, that I really understood it. The passion in those Old Firm games is something else. It is more intense than in any other derby I know.

Rangers hadn't won the league in eight years when I got there. I knew the job was going to be a major challenge.

But they were my boyhood club and, while the last two decades haven't been great for Scottish football, they were giants of world football at that time and big guys on the block. I was excited by that.

I always say that the Rangers and Celtic jobs are the toughest in football. The expectation level from the supporters is enormous and every opponent is desperate to beat you.

On a regular basis, we would have individual players who cost more than the entire team we were playing against. But it didn't guarantee us anything.

Often, we would come up against players where I would think, ‘I have to keep an eye on this kid, he looks special'. But then I’d go and watch him playing against one of the smaller sides in Scotland and he just wouldn’t be the same.

I quickly realised that players fell into two categories when they came up against Rangers. Either they were Celtic supporters, who didn’t like you very much and wanted to show it, or they were Rangers supporters, who would find that extra bit in their game to try and impress you.

For that reason, we never had easy games. Obviously, there were games that ended up being easy, but there was always a period of at least 45 minutes or an hour where we were in a real battle.

From my perspective, it didn’t help that I was a target for opponents.

I was infamously sent off on my debut for Rangers, against Hibernian, and I would often get cards for tackles that other players would make and get absolutely nothing.

I used to say to Phil Boersma, one of my assistants who I knew from Liverpool, ‘Hey lad, there’s a target on my back.’

I think it was to do with the way crowds would react to me away from home, and perhaps I was a bit naïve too. I should have been rolling over and pretending I was injured. That had started to creep into the game at that point, but it’s not something I’d ever done in my career.

We lost two of my first three games in charge, but it wasn’t long before we hit our stride and we went on to finish my first season as champions.

Signing top players from English clubs was a big part of our success. Traditionally, players had moved in the opposite direction across the border, but we were able to reverse that trend.

This was long before Sky money came into the game with the advent of the Premier League, so Rangers could still compete with the likes of Liverpool and Manchester United financially.

My arrival there also coincided with English teams being banned from European competition following the Heysel Stadium disaster.

We had an all-seater stadium at Ibrox, so we were ahead of the game in that respect, and the fact that we could offer the same top wages you would get in England - plus the added attraction of being able to compete in Europe – made us a big draw.

We managed to attract the likes of Gary Stevens, Mark Hateley and Trevor Steven, but the catalyst for it all was the signing of Terry Butcher from Ipswich soon after my appointment.

Terry was magnificent for me, both on the pitch and off it. I always say you need good senior pros to be successful and I was lucky to have men like him in the dressing room.

He was also the England captain at the time, which made everyone sit up and take notice of Glasgow Rangers and Scottish football.

It put a marker down, and it was quite easy to sign other English players on the strength of that.

We also signed Ray Wilkins, Richard Gough and many other serious – and I mean serious – professionals. These were guys who I had played against, guys who would have got into anyone’s team at the time.

We ended up finishing third in my second year, but I maintain that our struggles that season were down to Butcher breaking his leg in a game against Aberdeen in November. He was our leader on the pitch and we missed him badly.

I remember saying to the players and the club’s directors after that second season, ‘So, is this how it’s going to be? We win the league one year, then Celtic win it the next?

I told them it couldn’t be like that. We had to be at it every single year.

That attitude was something I’d picked up as a player at Liverpool and it was what we needed at Rangers in order to dominate. We never got further than the quarter-finals in the European Cup, which was a shame, but no one could argue that we didn’t dominate in Scotland.

People talk about the 5-1 Old Firm win at Ibrox at the start of my third season as the moment that the power shifted from Celtic to Rangers, but I believe it happened in my first year.

I know we didn’t win the title in the second year, but we were still on an upward curve. We were building momentum. The power shift happened long before that 5-1 win. บอลวันนี้ช่องไหน