Fulham took control of their Championship play-off semi-final as super goals from Josh Onomah and Neeskens Kebano earned them a 2-0 first-leg win at Cardiff. 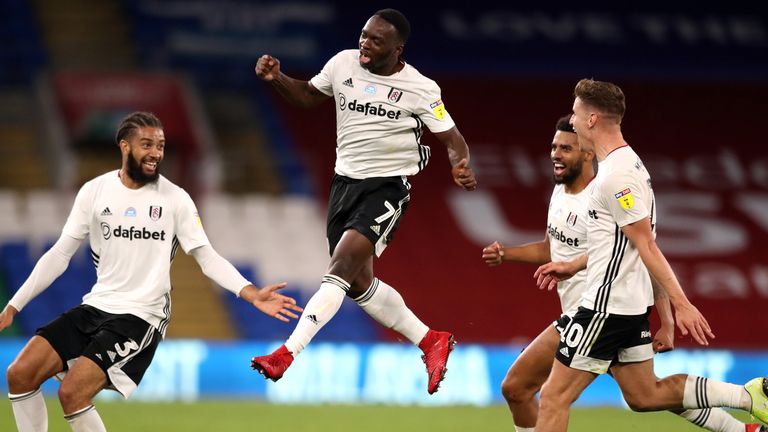 In a cagey first half it was Cardiff who went closest on 13 minutes. Leandro Bacuna hit a stinging drive that was kept out by Marek Rodak, but Michael Hector did brilliantly on his own goal line to get ahead of Robert Glatzel and deny the striker the opportunity to turn home the rebound.

Fulham, who were missing Golden Boot-winning striker Aleksandar Mitrovic, looked to be lacking a little cutting edge early on, but there were no signs of that just after half-time as Onomah scored a quite wonderful opener.

Picking up the ball from Harrison Reed on the edge of the area. He turned Marlon Pack, glided past Sean Morrison and then shimmied away from Curtis Nelson before slotting low into the bottom corner.

Cardiff simply couldn't find a leveller after that as Fulham squeezed them out of the game, dominating possession and not giving their hosts a sniff of a chance. And they may have taken the tie beyond their opponents in the first minute of stoppage time as Kebano netted his third free-kick in as many games, swinging an effort over the wall and beyond the helpless Alex Smithies from the edge of the box.

No side has ever overturned a two-goal first-leg deficit to reach the Championship play-off final, and Gary O'Neil believes that second Fulham goal may have taken the tie beyond them.

"It's a huge blow for Cardiff," he told Sky Sports. "At 1-0 down you feel like you're still in the game, but when that goes in it makes your job so much more difficult in that second leg. You feel almost out of it. It'll take a huge effort from Cardiff.

"I think the first goal is going to be crucial but the thing Cardiff need to hang on to is that 2-0 can be a tricky scoreline. You feel so comfortable but then as soon as the other team get one back, it feels an awful lot closer than it did before. The pressure is off them now so Cardiff go to Craven Cottage and have a free hit. If they can take their early chances and come out fast again, it could very easily turn around, so this tie is by no means done and dusted."

History may be against them but Cardiff boss Neil Harris believes his side still have a chance.

"We have to dust ourselves down and go again on Thursday," he said. "It's a quick turnaround and I said to the players that in the play-off finals I've made we've been losing at half-time, and Fulham were celebrating here like they've won the tie.

"But we go to Craven Cottage and we have to be positive and the first goal will be key. We saw Northampton versus Cheltenham in the League Two play-offs. Northampton turned around a two-goal deficit and went on to win at Wembley. It doesn't mean it's going to happen, but we do have to go and win at Craven Cottage." บอลวันนี้

An incredible goal that capped off a brilliant performance. Onomah helped dominate Fulham dominate midfield virtually throughout the first leg, and provided a moment of magic that will live long in the memory.

"It was a fantastic goal," said Fulham boss Scott Parker to Sky Sports after the game. "Josh has been fantastic since he's come here. This was the position we were trying to get him in and from there his skill and his quality comes through. I'm so pleased for him. He really deserves what he's done."