Crawley hit his third Test fifty on the final day of last week's drawn match at The Ageas Bowl and built on that outstandingly, reaching 150 from 233 balls and then moving past his previous best first-class score of 168, which he had amassed for Kent against Glamorgan. 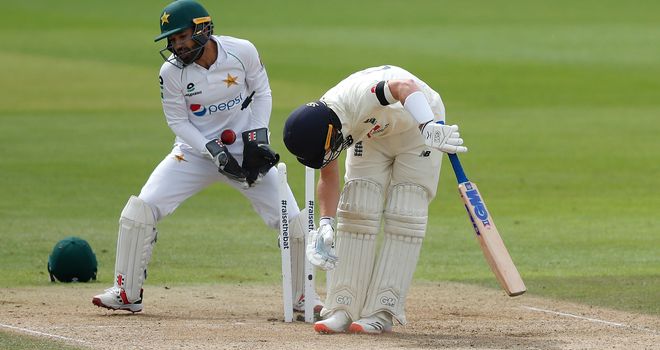 England will seal a first Test series win over Pakistan since 2010 if they avoid defeat and Crawley and Buttler - the latter having struck an 18th Test fifty - have given them a superb platform after a wind-swept day on the south coast, one on which leg-spinner Yasir Shah (2-107) bowled 28 overs.

All eyes were on England's bowling attack at the toss - which was delayed by 10 minutes due to a brief shower - where captain Joe Root confirmed paceman Jofra Archer would return in place of all-rounder Sam Curran having been rested for the second Test at the same venue.

But when Root opted to bat after calling correctly, attention turned to the top order, who went on to have mixed days against unchanged Pakistan.

Rory Burns (6) snicked Shaheen Afridi behind in the fifth over as his tough series continued - the left-hander averaging five with a top-score of 10 and left-arm quick Shaheen responsible for three of his four dismissals.

Dom Sibley (22) fared better, contributing 16 in a second-wicket stand of 61 with dominant partner Crawley before he was pinned lbw by Yasir after advancing down the pitch looking to whip into the leg-side - Sibley's failed review showing middle stump would have been knocked back. เว็บบอล888

Crawley was England's star, though, with a fluffed sweep off the impressive Yasir and a ballooned pull off Shaheen his only real jittery moments as he completed his fourth first-class hundred after three previous for Kent.

His brisk tempo meant England rattled along at around four an over at one stage in the opening session - that dipped as Crawley spent 16 balls on 49 before sealing his fifty from 80 deliveries on the stroke of lunch with a gorgeous off-drive for four off Shaheen.