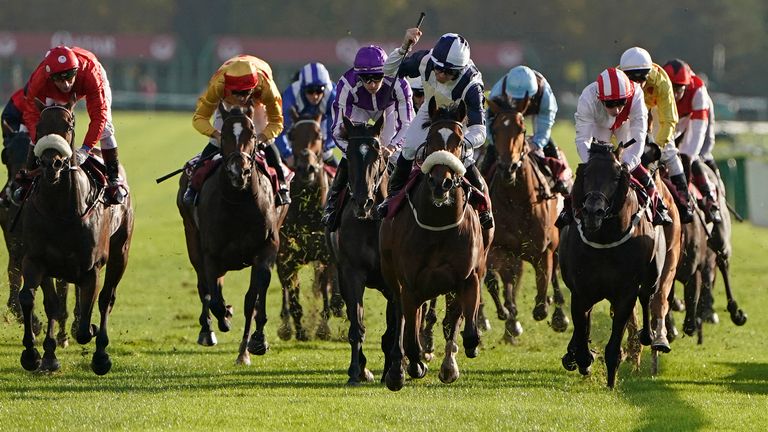 Glass Slippers stayed on in determined fashion to add the Derrinstown Stud Flying Five Stakes at the Curragh to her Prix de l'Abbaye success of last season.

Kevin Ryan's filly had chased home Battaash at Goodwood last time out, having finished fifth behind the same horse at Royal Ascot.

She was actually one of the first off the bridle as Nunthorpe runner-up Que Amoro and Keep Busy went at it hammer and tongs from an early stage.

With two furlongs to run Que Amoro was back-pedalling, but the John Quinn-trained Keep Busy was still at the head of affairs with Maid In India and another Quinn runner, Liberty Beach, also in there fighting.

But Tom Eaves was beginning to get a tune out of Glass Slippers (9-2) against the far rail as they approached the final furlong and she hit the front with 100 yards to run. Keep Busy, running in Doreen Tabor's silks for the first time, was a game second, with Sonaiyla staying on for third.

A'Ali and Make A Challenge, two of the favourites, never threatened to get in a serious blow.

Speaking from his North Yorkshire base, Ryan said: "She's so tough and genuine, but she has a lot of class.

"She loves it when they go really quick, but the ground was tacky today so she's done well to cope with that. I'm absolutely delighted. ราคาบอลไหล

"Darren Bunyan has done a marvellous job with her the last 48 hours, it's not easy handing it over to someone else, but he's produced her in tip-top shape so I'm very thankful to the Curragh and Darren.

"It was Terry Holdcroft's (owner of Bearstone Stud) decision to miss the Nunthorpe and give her a bit more time and he's obviously been vindicated.

"She's an amazing filly, so simple to train and makes my job very easy. She'll go back for the Abbaye now."

Eaves said: "She's been a great filly for everyone involved and has been extremely good to me.

"It's a great training performance by Kevin and she seems to come right at the back end of the year. It's a great result for everyone.

"Kevin didn't rush her and we were pleased after the run at Goodwood that she was heading the right way again."