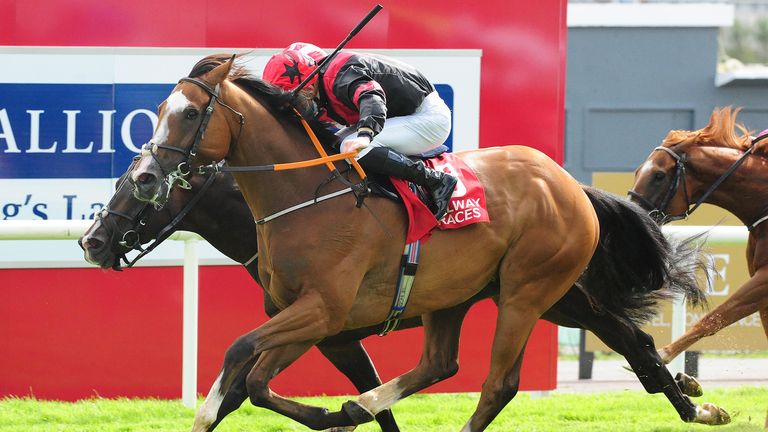 McGuinness saddled Saltonstall to land Tuesday's BMW Mile, before Sirjack Thomas doubled his tally on Saturday. Ryan was aboard both horses and had also ridden winners for Dermot Weld and Donnacha O'Brien during the course of the week.

Having disappointed behind his stablemate Saltonstall earlier in the week, Current Option was a 15-2 shot for the final day feature.

The four-year-old travelled sweetly for much of the seven-furlong contest and picked up well once the gap came in the straight to score by a neck from 7-4 favourite Njord.

It was a second big-race triumph for Current Option, having landed the similarly valuable Sovereign Path Handicap on Irish Champions Weekend at Leopardstown last September.

"His work and Saltonstall's was like chalk and cheese. The other horse came out and won the other day, but the draw killed this horse. The draw is crucial here.

"The kid was very good on him again and I've had a week I'll never forget with three winners.

"I've never won a Stakes race before, so hopefully I have a few horses that are capable of doing it now."

Ya Ya Baby justified 7-4 favouritism in the opening Kenny Galway Handicap.

Runner-up on her two most recent starts, Jessica Harrington's filly knuckled down to get the better of Take My Hand by a short head in the hands of Shane Foley.

"She battled well and is all heart. The ground is very testing and gluey," said Foley.

Foley and Harrington made it a double with Camphor (9-4) in the JPK Fencing Race.

Johnny Murtagh continued his excellent run of form as Fourhometwo (6-4 favourite) went one better than when second on his Gowran debut in the Lord Hemphill Memorial Irish EBF Median Auction Maiden. วิเคราะห์บอลวันนี้

Winning jockey Shane B Kelly said: "He's a horse that would appreciate a bit better ground, but he got through it well. He's hardy and has improved from his first run.

"I'd say there is more improvement to come from him. He showed a good attitude and was probably in front plenty soon enough. He's learning all the time and we like him."

Denis Hogan and Joey Sheridan teamed up to claim the Ardilaun Hotel Handicap with 9-4 favourite Darkened.

Runner-up at the track on Tuesday, the four-year-old went one better with a narrow verdict over The Mpex Kid.

"It's good to get his head in front. He was a bit unlucky the other day as he lost a lot of ground around the outside and we were 5lb well-in today," said Hogan.

"I thought he gave me a nice feel on winter heavy over hurdles one day, but he didn't stay. He could be nice for a bigger handicap later in the year."

Pista (12-1) and Shane Crosse led home a one-two for Joseph O'Brien in the Irish Stallion Farms EBF Fillies Maiden, with stable companion Lady Dahlia best of the rest in second.

Willie Mullins notched his 10th winner of the meeting in the closing Fr. Breen Memorial Handicap as the Rachael Blackmore-ridden Eight And Bob (11-4 favourite) prevailed.